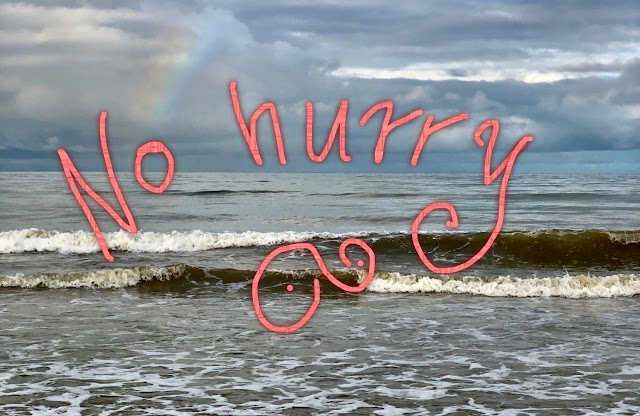 As if with a slow inhalation, the monastery is inching out of lockdown and into increased openness. For the past weeks, the closure had been more intense on account of having four members of the community sick with Covid: although getting sick is a part of life, we felt a responsibility to not pass on our bugs to members of the public. Thankfully, the infected people have all recovered, and we can now allow visitors in to share our space – albeit in a limited way.

So there has been a blockage in terms of what we expect. It happens quite often: the bus or train is late; the visitor doesn't show up; the machine breaks down – and so on. And when that happens, your mind can do one of a number of things. Firstly, you can get annoyed and blame someone (or blame yourself). Secondly, you can feel depressed and cheated by life. Thirdly, you can wait patiently. And finally, your mind can pause, open and appreciate the space where the will relaxes and it feels good to be conscious with nothing to do and nowhere to go.

The significant point is that when you can’t get what you want, your underlying tendencies to get exasperated or feel let down come up – and they then interpret the situation as ‘lazy disorganized people’ or ‘no one considers my feelings’. Actually there are generally a number of causes as to why things don’t go my way — the Buddha just called it ‘dukkha’ – but the immediate reaction and interpretation are an indication of tendencies in one’s own mind.  So just to pause at that point – reactions are normal, but we can read them, learn what they are, and that they take us into suffering. We don't have to guess at why things aren't going according to plan; and jumping to a conclusion is always a move into the shadows of one's own mind.  So, pause. A pause is not a disapproval or a judgement; it’s an opening of attention. And that allows us to respond to our reactions with mindfulness and compassion.  Pausing is an essential, deep and accessible practice.

Can you allow ten seconds for a pause in the midst of what arises? When you take note of instances of people losing their temper or following impulses that lead to harm, even death, it’s  obviously important.  And it seems easy in theory, but the difficulty, and the learning, is that you have to face your planned drive, as well as meet the reflexes and reactions that arise when you do that: 'What’s the point of pausing?’ ‘Not now’ ‘ I have to get on.’ Pretty convincing, aren't they?

Meeting and investigating this urge to get on (bhava tanhā) is what meditation training is about.  Take mindfulness of breathing: the practice is to follow the exhalation into the pause phase where the abdominal muscles come to rest, as if there is no next inhalation. Then let the inhalation gather, fulfil itself and also come to rest with the upper chest and throat lightly expanded. The pause phase is the crucial bit: it’s when the will lets go. That brings a relaxation at the end of the out-breath, and a bright opening at the end of the inhalation. As you tune into that pause, and trust letting go of the next moment, or of what to do, or even who you are – there is a growing sense of release.

Monastic life is full of pauses: we wait for things to arrive; wait for everyone to gather before the communal rituals begin; wait for the bell to ring before taking the meal. And in training, one is encouraged not to do anything whilst waiting, not even to talk. It all seems pretty inefficient and frustrating, even disrespectful, at first: a scenario wherein people are late, things aren't happening on time.... But that's a miserable way of looking at it; you can only do that for so long before you recognize that waiting for the expected thing to happen is suffering – and maybe something deeper is possible. Gradually you learn to hold expectations lightly and be prepared to let go of them, rather than wait for the expected thing to happen.

The difference between waiting and pausing is that the pause deepens beyond being patient. You might support the pause by being mindful of your body standing or sitting, or through reciting a mantra, but a deep pause isn't about picking up even a subtle form of mental activity. It's about the mind opening beyond preoccupation. Then, instead of a tangled energy of remembering, chewing on and restraining one's wishes, there is a restful open energy. Having fully understood that attachment to desire is the root of suffering, the mind goes into a different mode. Rather than wrangle or distract, it relinquishes will power and the need to make things go a certain way. Instead there’s an opening into steady awareness. Maybe dying could be like this.

Rather than numbing out, this open state allows the topic of one's expectation to go down like the sun – and arise again in a fresh light. One can then pick up the thread of what one was doing or talking about with a fresh mind and a shift in perspective – or one can decide to drop it. There's an opportunity for a transformative choice. Because unless you've deliberately paused and released it, a thread of grievance or passion has just gone into storage – and will arise later. Threads don't drop by themselves when the mind that is holding them moves into the background. But the possibility that the pause offers is to place a topic under an open timeless light; having reviewed it, its basis can be seen and relinquished. And at other times, having let an idea rest in that aware space, new angles and insights into it arise as the mind re-engages.

There are mundane benefits in pausing. I've noticed this when I teach with someone translating what I say into another language. What seems to work best is if I talk for about three seconds, then pause while that is being translated ... and so on, to and fro, for up to an hour. You might think this is very disjointed and difficult, but bilingual listeners say it's like hearing the teaching in stereo; the translator finds that they don't have to think, they just speak as they're hearing it; and I find it helps to provide the pauses in the mental flow that allow a point to be further expanded, a nuance added, or for the line of thought to be moderated or steered. Yes, maybe rebirth can be like this.

Recently I discovered that I could pause while writing – writing by hand, that is. My handwriting has deteriorated over the years as it has increasingly been replaced by typing. I do prefer to write letters by hand, because a hand-written note carries irreplaceable character and care; an intimacy and uniqueness that a typed message can't. But it feels disrespectful to write something that the reader has to strain to read. Working with this, I've noticed that a balance has to be struck: there has to be the ongoing flow of thought that is leading the writing, and yet if it runs too fast, the hand that follows it loses some of the dexterity that is required to form the letters. The 'o' squashes up against the next letter, the 's' loses its curves.... However, studying manuals on improving handwriting, I found that too much attention on forming the letters seemed to block the natural flow of thought. What was really needed was to moderate the mind. Working from that perspective, I realized that I could pause at any point in writing a word; the mind would then hover for a vital second to attend more carefully to the lettering without losing the train of thought – and that led to an improvement on all counts. Not every thought has to be completed, let alone expressed. That's a point worth pausing over.

The pause from thinking or planning also offers the amazing occasion of sharing an open space with others. Another element of monastic life is that you don’t have to talking about this or that in order to be with another person. It's strange but understandable that at first shared silence (rather than shutting down) can feel awkward and almost unbearable as the gestures, repartee and personal topics fall away. Still, in the presence of meditation masters that's what happens. It takes some trust, but opens into shared presence – a quiet and cool form of love.

Of course, these past 18 months in varying degrees of lockdown have been an intense workout as what has been put aside is much of the fabric of our lives: sangha meetings, festivals enriched by hundreds of ebullient supporters, and travelling to teach and share Dhamma ... with no great change in sight. 'Can you come next month?' 'Who knows?' 'Next year?' 'Not certain.' Yet it's good to pause and review how much one identifies with circumstances and occupations. And to also pause before getting born into disappointment and irritation: instead of getting upset about it, it's good to know how much this life of sharing means. It's a Refuge. Someone who takes that sense of shared presence into their heart is never lost or alone.

Posted by Ajahn Sucitto at 13:18 No comments: