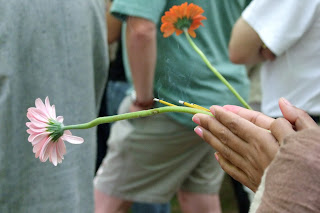 At about this time in the year, Buddhists throughout the world are, will be, or have been celebrating Visakha Puja or ‘Wesak’. With a wonderful sense of economy, this celebration is of the Buddha’s birth, enlight-enment and passing away.  Actually, the date in the solar calendar varies from year to year because it’s the full moon day of the lunar month of Visakha; and often Western Buddhists choose to hold any festivities on a nearby Sunday.  No one is even that sure that the Buddha’s sense of occasion was that focused to allocate his major life-events to the same day, but I’ve never heard anyone debate the topic either. After all, it’s just a way of giving the practice of reflecting on the qualities of the Buddha a communal and public focus. It’s an element of spiritual culture – and as a Dhamma-practice, the idea is to make use of it rather than believe in it as a literal truth.

Spiritual culture as a Dhamma practice is above all about what you do. Any Wesak will normally centre on a circumambulation of a shrine carrying flowers, incense and candles: these represent morality, meditation and wisdom, the three limbs of the Buddhist Path.  Inwardly, the practitioner will be recollecting these as well as the Buddha’s calm, compassion and happiness. Considering the topics that one could spend an hour or so considering, this is a pretty good theme for the heart/mind to turn over.  And not to be limited to one day per year, Buddhists will hold similar events on several other markers in the year, and even make up a few to keep topped up.  After all, such occasions bring people together in a friendly (and sober) way, and at least in Asia, they support the dropping of disputes and differences, and the affirmation of harmony in the human and natural world – and that’s good news.

In the West, such events and all the paraphernalia of images and tokens gets a mixed reception because another term for spiritual culture is ‘religion’ – and a good number of Dhamma-practitioners are uneasy about religion. ‘Religion is about blind belief, right? Isn’t religion an affirmation of myths and other-worldly hocus-pocus? A sacrifice of the intellect on the altar of superstition? The transference of power to non-existent gods that keeps us under the power of a priestly institution? We don’t want any of that.’ Quite rightly so. Meanwhile, religious forms and observances and all kinds of cultural rituals – from weddings to funerals, to graduation ceremonies and presidential inaugurations – are practised by the majority of humanity. They give reference to something beyond (if within) the socio-economic parameters of making a living and attachment to fleeting sense-phenomena, and become sources of consolation, faith and harmony in the face of death, evil and conflict. Ritual, especially corporate ritual, highlights an undertaking by driving a mooring post into the drifting stream of mind. It can of course be driven in with ulterior motives: the fact that religions are also used for political ends, to establish power structures, rake in donations and become sources of conflict highlights the way that humans can corrupt just about anything.  However, in the broadest sense of the word, religion – an external form or convention that establishes references to moor and steer one’s life by – is inevitable; it just has to be used wisely, to keep it connected to valid experience and practice.

So the choice is around using religion wisely, rather than whether ‘true’ spirituality needs such an expression. This is because all spiritual practices sooner or later, and particularly as they become corporate, produce religious forms. Religion is the outer, visible and enactable aspect of what is intimately experienced as truth, compassion, ethics, transcendence and so on. There is no way that these inner experiences can be communicated and referred to except through an outer form. As an early example, there is the occasion recorded in the Buddhist texts of 1250 arahants (enlightened disciples) spontaneously gathering at the Buddha’s dwelling in the Bamboo Grove at Rajagāha. They had no needs, and made no requests; it was just an observance, an collective act of affirmation of the Buddha.  And the Buddha’s response wasn’t to tell them to go away and meditate, but to mark the occasion with a summary of Dhamma-practice – the Ovāda Pāṭimokkha – that has been learnt and recited ever since. On other occasions he recommended visiting and revering as shrines the places where one has made commitments to Dhamma, or where a Buddha has lived.  And more commonly, he advocated bringing to mind and dwelling on the qualities of the Buddha, the Dhamma and the Sangha as a source of uplift, of calm and of self-assessment.  In fact, this is the basis of Buddhist practice in the Asian tradition.

In the West, the Dhamma-culture has other accepted forms.  Here rather than gather around the Buddha, we gather around a teacher; we offer that affirmation, often for a fee. We meet in Dhamma-centres and subscribe to the rituals of silence, routines and however the management and teacher want us to behave. We have faith (some might say belief) that this will be for our welfare – as it often is to a degree. Coming out of our socio-domestic scenario has its benefits, and although the narrative continues in our heads and hearts, our sense that some transcendence is possible is supported by the outward forms of teacher, companions, structure and systems.  More subtly, the goal itself is encapsulated in the language structure of the teaching: whether you have jhāna or ñāna, and confirmation by the teacher as to the level and stage you are at, will all give you something to hold onto, sign up for, or a means of comparing yourself with others.  Of course, worldly influences are there: the centre and the teacher have to make money; there are advertisements, celebrities and marketing strategies.  Spiritual authority is invested in the teacher. There is the expectation that you participate in more events. It's a modern-day Church.

There are also Buddhist conferences to which delegates and speakers are invited to deliver talks, debate issues and make collective pronouncements. Others may also purchase a ticket to attend. And rather than images and rituals, texts are the preoccupation. Even hard-bitten rationalists find themselves referring to, and of course debating, the validity of, scriptures. And they may very well write a book or two, in which their opinions and ideas will be lifted out of the temporary flow of dialogue into a lasting form – the new orthodoxy. This will be on sale to the general public. So rather than the affirmation of the Buddha and the offerings of flowers, we move towards the affirmation of the teacher (and his or her words and system) and the requirement of money.  Some call this ‘secular/Protestant Buddhism’ and see it as an advancement.  To me, it’s religion again: the external form of spirituality, with its benefits and drawbacks.

Even the attempts to clean up religion becomes another religion. Witness the Protestant and Puritan movements in Christianity, with their preference for texts over images, their taboos, dress-codes, and required communal observances.  And when religion is banned altogether, then statues of the Great Leader are erected, his thoughts are canonized, and veneration of his birthday and his tomb become the required ritual. As an alternative, one could surrender one’s spirit to the icons of materialism – designer-labelled apparel, gadgets and consumables – or to its rituals: the game, the show, or the party.

The Buddha accepted the spiritual-religious-cultural process, but challenged or validated the connection between interior and exterior. For example, on one occasion, having demonstrated in debate the contradictions and blindness in the ascetic practices of Nigrodha, the Buddha then refrains from dismissing Nigrodha’s rules and observances or from presenting his own. In an act of great spiritual generosity, he instead advocates that Nigrodha keeps to his own religion but inquires into its interior aspects:

There are, Nigrodha, unwholesome things that have not been abandoned, tainted, conducive to rebirth, fearful, productive of painful results in the future … It is for the abandonment of these things that I teach Dhamma. If you practise accordingly, these tainted things will be abandoned … and you will attain to and dwell in this very life by your own insight and realization, in the fullness of perfected wisdom.  D.25.23 (Udumbarika-Sihanāda sutta)

A further example of the Buddha’s advocacy of wise reflection is laid out in the Kālāma sutta (Numerical Discourses, A. 3, 65). In summary, the Buddha advises the Kālāmas to not rely on ten sources of belief. These are: the four sources of scriptural authority (texts, oral transmission, lineage and hearsay), the four bases of personal reasoning (logic, inference, cogitation and contemplation) and two examples of authoritative persons (exemplars and speakers). However he does encourage direct apprehension of what is skilful or unskilful in accordance with what is ‘praised by the wise’.[1] Belief in one’s own opinions therefore has to be balanced with the consensus of wise companions.

Balance and connection between the interior and exterior domains is the key. All mental/emotional ‘interiors’ have sensory, communicable ‘exteriors’ and furthermore interiors and the exteriors affect and shape each other – and that means that we have to be conscious and responsible around that process. We can’t stop our deeds affecting our hearts and minds and that of others. We can’t prevent our attitudes, affirmations and inclinations from affecting the world. If we hold to a mind-set that transfers wish-fulfilment and authority to an exterior form, then belief in that is what happens, along with blind (or enforced) devotion. If on the other hand we negate the value of exterior forms, then suppression, iconoclasm and a society shorn of depth-values is what happens. Either that, or we must look for satisfaction through the senses or the intellect. But if, in that case, we hold to a mind-set that ascribes truth to our rational processes, then individual arrogance and the dismissal of social life is what happens: the great disbelievers can’t live in or engender a corporate transmission. The responsibility as always rests with bringing the interior and the exterior into harmony: individually we have to practise mutual respect, inquiry and individual humility; as a collective we need to keep referring to and working with each other.

Fortunately extreme positions don’t last long: one of the great disbelievers, Krishnamurti, was also a mystic, and a loving (and flawed) man who encouraged education as his corporate legacy. Maoism has been quietly replaced by secular materialism or spiritual observance – and life goes on as before. Protestants, Catholics, Buddhist and others get together to discuss ‘God as a verb’, the role of transcendence in the material world, or of spiritual community in an age of fragmentation.  With time, common sense surfaces and asks for both deep inquiry and collective action: does this attitude, speech or action lead to suffering, or not? If I affirm this set of words as the only truth, does this lead to conflict, or to the welfare of myself and others – or not? Because if the interior and the exterior don't meet at a place of value, society breaks down under the pressure of anxiety, loneliness, competition and alienation.  Our undefinable but shared religion therefore has to be the understanding and removal of suffering and stress, its teaching, affirmation and avowal, on any level, in any scenario.


[1] Please see ‘In the Buddha’s Words’ by Bhikkhu Bodhi, Wisdom Publications 2005 for details.
Posted by Ajahn Sucitto at 21:21 2 comments: