Out of This World


In visiting the forest monasteries in North-East Thailand, I am struck by a number of perceptions that seem contradictory at first. One is their magnificence: vast halls built with an aesthetic of clean lines and balance, amongst which the ‘bot’ (Uposatha Hall) for Sangha meetings is the most exquisitely fitted, and the ‘sala’, the main hall in which the general public will listen to Dhamma talks, the largest. The ones at Wat Nong Pah Pong and Wat Pah Nanachat were designed by Luang Por Liem, according to a set of plans that he carries in his head, and built by teams of bhikkhus. Their shrines are monumental and laid out in accordance with the Thai sense of beauty: flowing lines, smooth contours and gently glowing surfaces embossed with floral motifs and delicate serpentine regalia. The main body of the hall is empty except for a raised seat from which Dhamma talks are given, but with a floor of smooth stone. It looks beautiful, but when you sit on it ( there are no cushions and only the senior monks are offered mats to place between body and stone) you recognize that physical discomfort is another aspect of the norm. As is the fact that no-one so much as mentions it. At a large gathering such as the Luang Por Chah memorial celebration (or ‘ngahn’) the main sala is packed with people listening to Dhamma talks from about 7 p.m. to 5 a.m. with many ‘Sadhu!’s, some sleepy nodding – but there’s not a squirm or a grumble.

That sense of serenity becomes even more remarkable on such an occasion, when an estimated 10,000 people ( 90% women dressed in white – shopkeepers, teachers, managers of companies) throng through the monastery with cheerful good humour or composed demeanour, and without any shoving, bickering, fences, tickets, ushers or crowd control. People walk around quite freely as announcements concerning the program come over the public address system. Dhamma talks are broadcast too: there isn’t room for everyone in the sala, but that’s also OK; there’s no agitation or pressure. Many people are camped out, in mini-tents pegged only a few centimetres apart, or on nylon sheets with a mosquito net and a blanket. It could be a refugee camp – and in a way it is: the manyfolk are assembling to take Refuge in the Triple Gem under the auspices of the resident sangha. But here there’s neither desperation or disorientation: the ngahn is a collective recollection of their beloved teacher, the late Luang Por Chah, and people are clearly very much at home. So although the buildings are monumental, the atmosphere is human, and beautifully so. Here human beings are at their cooperative and good-humoured best. It’s a fitting tribute: group harmony, a beloved Thai value, is taken to sacred heights in Luang Por Chah’s forest monasteries; it takes people out of the world of self-interest, personal gain and status into a warm-hearted communion. That this is all centred around the personal integrity and compassion of one individual bhikkhu is another paradox: you might have assumed that a life dedicated to recluseship would be an isolated affair. 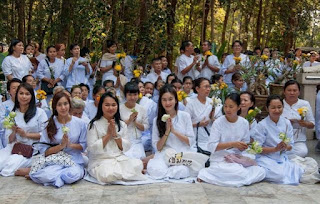 As I move around from one hall to the next, I hear my name being broadcast over the loudspeakers. Someone explains that the announcer has just asked people to look out for me, since I don’t speak Thai and might not know what’s going on and where to go. It’s a typical touching gesture: among over 600 monks, of whom I might exchange minimal pleasanteries and gestures with half-a-dozen, my presence is noted and respectful attention offered. Actually I hardly need it, as I know the basic principles that pertain in a forest monastery: maintain mindfulness, walk slowly, be aware of the group and follow where the majority of the other bhikkhus are going – and crowds will part before you, often with encouraging smiles and gestures. Eventually this process will take you to an allocated place in the midst of the assembly. You kneel, pay respects to the shrine and the senior monk and settle in. It’s personal and impersonal at the same time.

On one evening, I am invited to give a talk, in a language which about 5% of the assembly can understand, and yet it is received with a respectful ‘Sādhu!’ This is beautiful and humbling at the same time: does the verbal content, or the intelligence of the articulation really matter that much? What most people know is the English Ajahn of forty Rains has presented the Dhamma for about forty-five minutes, so it must be good. And for sure, they’ve heard the themes of the Buddha’s teaching countless times; what counts here is the careful presentation, the respectful listening and the presence of the assembly – which in a psychological sense reaches back to the time of the Buddha and the great disciples. So ‘Sādhu’ – the transmission is good, the communion in Dhamma is good. Indeed we rejoice!

A pivotal theme in my talk had been the fact of our mortality, along with the keenness and clarity that recollection of one’s certain and unpredictable death brings to the mind. It’s a typical forest Dhamma theme; like several others – the unattractiveness of the body, and the need to keep to the austere standards are prime examples – the effect is sobering rather than comforting. There are the talks that chide as well as the inspiring anecdotes, yet the assembly hear uncomfortable truths – and sit serenely uncushioned on that merciless stone floor – with appreciation, and seem even more uplifted and gladdened by it. The details of beauty and refinement on one hand and the raw facts of life on the other may seem to be contradictory, but taken together the meaning is clear: there is the True, the Good and the Beautiful; the Doors to the Deathless are open – but you enter through meeting suffering head-on.

Take the ngahn itself. Can you imagine the arrangements in terms of food, water and toilets alone that an assembly of over 1500 people require? Yet such arrangements as there are happen with barely a ripple in the collective psyche. There’s a water shortage in the province, but Luang Por Liem considers that asking the Army to truck water in would put a strain on the services and possibly take water away from elsewhere. So he asks the local villagers if he can rig up a pump in the pond outside the monastery. On obtaining their assent, he and a few monks build a water tower and so gets water pumped up into tanks to service the assembly. He tells us that even with a filter installed, the untreated water looks and tastes a bit foul, so he calculates the amount of water there is in the pond and throws into it a hundred or so litres of the probiotic that he concocts out of fermenting left-over food. (He also passes this stuff put by the litre to sick bhikkhus, and offers it to the villagers to fertilise their fields; the reports are encouraging). Luang Por thinks that a hefty dose of his potion should deal with the micro-organisms and bacteria in the water. Maybe so; I didn’t try it.

But that’s Luang Por Liem’s style: earthy, hands-on, and totally devoid of fluster or drama. When he’s not physically working, he’s receiving groups of bhikkhus, seemingly without end and throughout the day in the space under his modest dwelling. He doesn’t seem to change mood, and delivers mind-stopping one-liners with a twist of humour. ( For example: 'We don't practise for the sake of anything, we practise for the sake of practice') After a while you notice: there are always people occupying his space; he sleeps on a mat under the dwelling (which is actually used as a store room); monks massage and bathe him there. His is a space that has no walls. It’s simple, open and serene in the midst of people, duties, comings and goings – and that speaks of a profound attainment.

The modesty of the bhikkhus’ personal dwellings offsets, or rather internalizes, the magnificence that the public spaces present. After the ngahn, I stayed on in the nearby Wat Pah Nanachat to be in the ordinary flow of things. The mix of the grand and the modest is the same. The floor in the sala is of polished stone; the alms-round is done bare-footed on the gravelly and pitted roads of the local villages; there is just one meal a day; and as the weather turns from what I experience as hot to a windy chill, the clothing remains the same. Our robes consist of a couple of simple cotton sheets to wrap around the body, to be worn with one shoulder left uncovered; no blankets or woolly hats are to be worn in the midst of the assembly. So we shiver. That’s the way it is. Especially as most of the bhikkhus live in packing-crate size wooden kutis that are designed to let air move through. At this time, they’re even more exposed: as there are a lot of visitors, many of the residents sleep on sheets on the ground under a mosquito-net umbrella. No one even questions it, let alone complains.

I contemplate the attitudes and the behaviour that support this way of life. The emphasis on personal modesty, integrity and resilience is inspiring; and the openness: whoever can commit to this practice is accepted as they are. On the other hand, the Thai way of accommodating and non-confrontation also allows for corruptions to continue in the Sangha and in the society. Tolerance and an easy-going attitude allow moral standards to loosen and decline; which is why the forest masters get fierce, and why Wat Pah Pong resists innovation and change. The forest Ajahns are aware that they represent a bulwark against the decay of the Triple Gem that they see as so prevalent.  But for me as a Westerner, the deep trust (and the sincere joy) of the devotees is both touching and a spur to be worthy of the faith that they offer me. I can't comment on Thailand in general, apart from to acknowledge that, yes, worldly defilement doesn't end in a Buddhist country. But there are no Dhamma countries, only places that support practice. Meanwhile all Dhamma practitioners have reason to feel blessed by the wisdom and depth of Thailand's great masters. This is what I take with me.

One day a group of us visit a few other forest monasteries, including that of Luang Por Ginaree (occasionally spelt ‘Kinalee’) – one of Ajahn Chah’s teachers – and a couple of those that Luang Por Mun occupied during his largely itinerant life. Their personal belongings are on display; each occupying a few glass cases and each being the sum total that could be found – which was far more than what they had held at any one time. Their belongings form a kind of biography: coarse cloth robes, a rolled-up mat of plaited bamboo fibres to sleep on, a water kettle, mug and so on. The pair of worn-down flip-flops that Luang Por Ginaree wore catch my attention – a beggar would have spurned them – along with the comment on his walking to India and back. Apparently it took him fifteen years, and he stayed in Burma for several of those years. A quick calculation tells me that this must have been during the Second World War, and the image of this modest bhikkhu living on alms-food and resolutely faring on without a map through the jungles, malaria and fury of that period sinks in. This is a magnificence that, while being far more deeply connected to the earth and to the hearts of thousands of people than most of us, is in its fullest sense, out of this world.