The Presence of Absence: living with an empty space 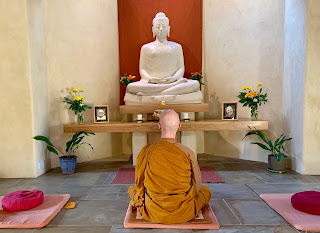 Having less of a function here does also allow me more scope to turn around. Behind me, the Buddha, the real Guiding Elder, is sitting upright but relaxed, with open eyes and mild smile. That's what he's modelled year after year. In words: 'Touch in with silence, don't fill all the gaps.' Get it? Full stop, period, end of.
Posted by Ajahn Sucitto at 15:51 1 comment: