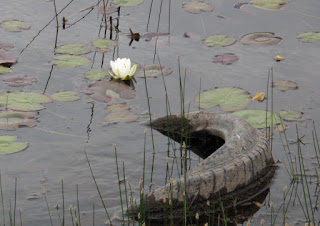 I recently received a message from a Dhamma-practitioner who has attended many of my retreat. She mentioned that on account of an anecdote I’d shared about the remarkable Sister Abegail of Kwa-Zulu Natal (that’s in South Africa) she was sending a donation to Kulugile, Sr. Abegail’s orphanage.  I met Sr. Abegail in 2015 when I was teaching in the area; she was then eighty years old and had recently returned from America after receiving an award from the Dalai Lama as one of the ‘unsung heroes of compassion’. For the greater part of her life she had with formidable resolve worked her way out of village life to a higher education, and into nursing and ordination. Often single-handedly (she would have said with God’s help) she had nursed orphans – including settling many of them into her own home – and set up care facilities in response to the AIDs epidemic that has ravaged the local population. The anecdote that I shared came out of our conversation: she’d been notified of a baby that had found in a trash bin and left for dead. True enough, the little one showed no signs of life – but with an ‘I’m not so sure…’ Abegail strapped the baby to her chest and carried and nursed it night and day. Sure enough, after a while she could detect a heartbeat… The little girl is now growing up. *

I think the point I was making was about not giving up on yourself or others no matter how bleak it gets; that compassion is the quality that willingly draws close to suffering and embraces it. It’s a quality that in its purest form isn’t even asking that things get better. In this way, it is boundless and free of harshness, indifference, and sorrow. Compassion is one of the ways the heart extends its precious resource of goodwill.  And the experience of the great heart is world-saving – even when it’s the experience of the great heart of others.  One’s perspective on suffering changes, and the sense of impotence shifts. For myself, even hearing of such acts of compassion lifts the spirit with another of those world-savers, mudita– the rejoicing in the goodness of human beings. The weight of hopelessness drops.  For me there was also the bonus of recognizing that my recounting of the story had linked Sr. Abigail’s action to people in a different continent – one of whom at least had responded with support for the orphanage.

Amidst the reports of governments all over the world failing to meet the needs of their nations, unable to address the prevailing inequality of wealth, and lacking the skill to act in cooperative ways to address the global environmental crisis, accounts of actions undertaken by individuals offer some cheer.  Maybe individual initiative is the easiest and most universal way forward. For many years, we have believed that systems and large organisations – World Economic Forum, IMF, etc., etc. – would address the big issues. This was surely the intention behind their foundation. But what happens when the systems themselves are seen as part of the problem, a branch of the global economy that prioritizes financial growth over environmental concern? How much trust can one have in the geo-political set up that support wars to gain political (and economic) influence? Frustration rises. Note the gathering tide of dissent in the streets, and the new ‘populism’ that moves, violently on occasion, against the global ethos and its governing elite.  And yet, to strike a more positive note, people outside the conventional systems are also attempting remedial action. Greta Thunberg, the teenage Swedish girl who spends one day per week sitting in protest against the lack of environmental action outside the national parliament, is an obvious example. Obvious because her simple directness presents some stunning soundbites; and her action is so courageous.* Whilst the official delegates travelled to the World Economic Forum in Davos by private jets and stayed in hotels, Greta took a 32-hour train journey to get there, and camped on the mountain. Who best models environmental concern? Who can then speak with real authority? Accordingly youngsters attending school over Europe have followed Greta’s example. But wherever you look, grass-roots action and local initiatives are on the upswing. Perhaps it’s always this way: the most relevant action of the time arises not from the established system, but outside the entangled processes that it has inevitably built up.  An individual decides they’re going to do something and, against all odds, if they act in purity, they attract support.  At least I like to think so, and that as that such intention forms Avaaz, or 350.org, or Greenpeace, or Earthjustice (and so on), action gathers momentum. My thinking this way is partly because I don’t see where else the impetus can arise from (witness the gridlocks and quagmire of the current US and UK political scene), and partly because it reminds me that authority really lies in our own minds and hearts. Every other source is a convenient but disempowering myth. Blindly following systems we get marched and speeded into their drive, while our own living system goes into inertia. The net result is personal impotence.

Thus the Buddha broke free and headed into the unknown and the perilous for his great awakening. As did many of his disciples. But as the Sangha was systematised and gained government support, its edge got blunted. Thus we now have national sanghas, overseen by government and adding cultural and iconic support (though not providing ethical example) to the status quo. Of course there are advantages in terms of administration, and on occasion the government supervision has been to ensure that monastic corruptions get weeded out. And yet … all systems require our valuable energies and obedience, attract power, get cluttered with laws and protocols – and they limit individual initiative. They need to be reviewed. Otherwise we take the resultant stasis for granted… the small indulgences drift it … and those of weak resolve fall away from taking personal responsibility. If a sangha can’t ensure its own purity, it’s because the Dhamma and the training has been overlooked in favour of worldly values. Then we’re no longer following the Buddha.

Finding a balance between managing a place as a Refuge and sanctuary and keeping one’s edge a challenging practice.  At Cittaviveka we used to do our own building and electrical work; now we’re not allowed to. Such work has to be done by professional contractors (who have to be checked, counterchecked and monitored). We have to establish and maintain the health and safety standards established by law – and yet our ‘job’ is primarily to offer training and resources for those who wish to go forth as monks and nuns. These aspirants come with their own problems and issues; and they will all be going through the upheavals that leaving home, partner, social position, entertainment and personal autonomy bring up. In brief, not every samana is in prime condition to undertake management. But all of them are living ethically and intent on consuming less: robes are patched, rooms are sparsely furnished, kutis just have a wood stove, a shrine, a rain barrel and a raised platform on which to sleep.  Even more important, no one wants it any other way. And through the inspiration that the goodness of the life brings, volunteers offer service and a human community comes alive.

Having researched and written about environmental matters (a book, Buddha-Nature, Human Nature, should appear by November), it bothers me at times that we aren’t doing more.  Sure we have installed solar panels, draw water from our well and derive heat from wood coppiced in our forest. We have no TVs, one washing machine (only used for sheets and towels – clothes are done by hand), one second-hand car (decades old). Lighting dims around 7:30 p.m. when the community enters meditation and only lights up again at 6:15 a.m.  And yet… the plastic concerns me. We have to live on what is offered. We have a sign pointing out the environmental harm caused by plastic; occasionally I mention it in talks. Donors still bring bottles of water. But even if it is recycled – how much energy does it take to recycle plastic? And what did it take to produce the stuff in the first place?

There is a war on. The planet is being attacked. Beyond the bombing and devastation, there are the steady invasive forces of consumerism, pollution, and squandering of irreplaceable resources – aka greed, hatred and delusion. What gets me most is the sheer needless acts of ignorance – the empty cans in the river, the lights left blazing in displays day and night, the drinkable water used to wash cars and flush lavatories and the culture of disposability. Where is the ‘away’ where we throw things? Where do all materials come from? And who cleans and pays the Earth? But as the Dhamma war is a war against war, it can’t be conducted as a righteous crusade. Instead the strategy is to cut off the enemy's supplies. Personally, I keep inquiring as to how within my own reach I can push back against ignorance; and questioning assumptions about lifestyle. Accordingly I determined to not drink water from plastic bottles – if I can get water elsewhere within 24 hours. I kept that vow in India (drank tap water, boiled, reasoning that I’d had dysentery in India twice before and it didn’t kill me); I require people attending my retreats to not bring any bottled water. One winter I turned my heating down to 13 C (55F), and used candles rather than electric lighting. I have a portable solar panel that I use to power a battery for devices; I don’t eat meat, or fish, and avoid dairy when possible; I only flush the toilet a few times a day, only shower once or twice a week, wash clothes infrequently (mostly just the layer next to the skin). I don’t use paper tissues (handkerchiefs for one end, water for the other).

And yet I fly to various parts of the planet (accompanied by a few hundred others) dumping tons of CO2 into the atmosphere as I do so. Well, the plane does. I reason that I only fly on invitation to teach the Dhamma, but it’s still doesn’t sit easily, with me, so I cram as much teaching as I can into every trip (that’s how I met Sr. Abegail). I also recognize that my personal contribution to the welfare of the environment can only be iconic; if I refrained from all forms of consumption, the net result in terms of the planet would still be infinitesimal.  But exemplifying some degree of renunciation and willingness to serve as an unpaid volunteer is something that may carry as much of a message as anything I say. Meanwhile to get the nourishment to sustain renunciation, goodwill, compassion and appreciative joy are of immeasurable value. As well as sustaining equanimity with regards to results. After all, people like me have been counselling refraining from the destruction of life, stealing, sexual misconduct, harmful speech, and intoxicants for millennia. All this abuse still goes on. But to give up working against it would be to give up on Dhamma, and on humanity. The Buddha didn’t.

Maybe at best I can inspire a few others to do what they can, and to do better than me.  Meanwhile, I’m doing what I can to take responsibility; the bottom line is that it keeps me alive in the heart. Shortly after I received the message about Sr. Abegail, we were asked to chant on behalf of a teenage suicide (internet trolling). It reminds me that unless we rescue our human resource, we don’t have a place or a reason to live.

* Sr. Abegail has written an autobiography: Empty Hands. Published by Penguin, it's available through commercial outlets.
Posted by Ajahn Sucitto at 14:16 2 comments: