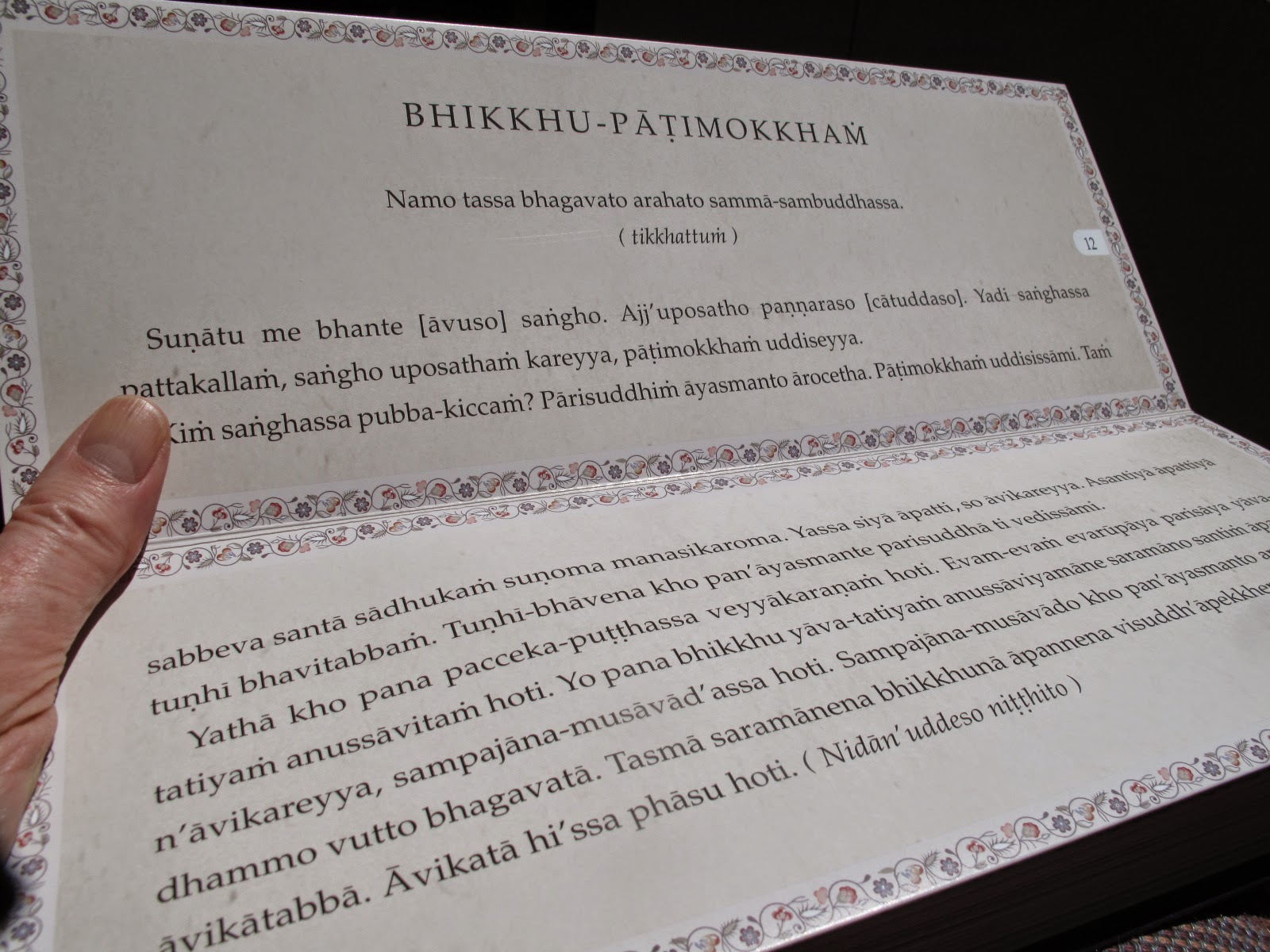 Having recently relinquished the post of Abbot of Cittaviveka, I’m taking a sabbatical. It’s a chance to put some activities aside, and as some space opens up, sense what feels right to give attention to.  One thing that seemed immediately attractive was to revive my rote recitation of the Pāṭimokkha, the bhikkhus’ code of training.  I first learnt to recite this Pali text during my fourth year as a bhikkhu, and recited it regularly by rota on the fortnightly Observance (Uposatha) days for over twenty years before the duties of abbot meant I couldn’t keep it going.  (By the way, Uposatha is the day when the sangha meets to confess offences, recollect training standards, conduct formal legislation and receive guidance from the teacher.) It took work to learn it (I practised it for one hour per day over a six-month period) and effort to keep it going – at a brisk pace it takes about fifty minutes to an hour to recite. It’s done by one bhikkhu sitting in the midst of the assembly while another keeps his eye on the text and interjects with corrections in case of an error.  So it can be nerve-racking – but I always felt it an honour to be rehearsing the same Pali syllables as had passed through the mouths of generations of bhikkhus from the time of the Buddha onwards.

The affirmative effect of the recitation isn’t just through the meaning of the text, but through the effort and one makes in undertaking to learn and recite it. On top of the channeling of energy that occurs with that commitment, the recitation, as a ritual in a formal setting, creates a deep bond. In fact, this is what Pāṭimokkha means: ‘a thorough bond’. Just like the Shabbat, or the hajj, or the lay eight-precept Observance day, or a marriage, such ritual gives a formal definition to your identity. You don’t think a ritual, you do it, you surrender to it; it creates an obligation that holds you in shape.  So the Pāṭimokkha forms the sangha as a collective and guides the individual, through loyalty and respect rather than policing, into the lifestyle that the Buddha advocated as optimal for liberation. Pāṭimokkha is a bond that prepares the mind for freedom.

As I said, it took work to keep it going, and eventually I couldn’t find the time/energy. So it’s a particular and strange pleasure to return to both memorizing and enunciating the ancient text with its long a’s, retroflex t’s and nasalized m’s. A training for the speech faculty, which like handwriting tends to get slurred and hasty over the years of casual use.  So when reciting, I don’t remember the meaning; the practice is to weave energy at speed between the mouth and the memory, in something like a wakeful trance. If you think of the next word, or worry about whether you’re getting it right, the recitation collapses as surely as a tightrope walker falls off the wire if he wavers.

But right at the end there is the group recitation of some closing passages, one of which is particularly stirring. It is an exhortation that a deva (celestial) gave before the Buddha (!) and to which the Awakened One gave his approval.  Some extracts are:

‘If one would do what should be done,
One should firmly exert oneself.
For a slack wanderer’s life
Only scatters more dust.

The recluse life, if wrongly lived
Merely drags one to hell.’ (S.2.8)

Stirring stuff.  And surprisingly this anthem doesn’t originate from some crabby ascetic, but from a deva – one of those celestials who crop up in the suttas (to the irritation of secular Buddhists) and who are generally depicted as blissed-out and often frivolous. Furthermore it focuses on essential aspects of practice that contemporary Buddhist teachings can omit: that we have to give up some rather pleasing experiences, and also to work hard. This is a far cry from the hip easy-going Buddha of Beat Zen. Neither, with it’s affirmation that there is something that should be done and a veiled threat to slackers, is it palatable to the ‘allow all, just be here’ strain of thought. But as part of a wide range of teachings it presents the gritty bit, the tough love of renunciation, restraint and effort. Bitter or not, these are good medicine: without them, the mind doesn’t develop strength and resilience; with them comes the inner warmth, gravity and imperturbability of the awakened mind. I think we need to remember that. Because in a Western milieu which emphasizes wisdom, compassion and mindfulness (and yes to all those), a tendency to spiritual narcissism can still linger. That is, Dhamma has to arrive on my terms, fit my lifestyle and world-view, address my apparent needs and not challenge my comfort zones.  Consequently there is no crossing over from self-view.

In the Buddha’s ‘graduated path’ – the presentation of the process of Dhamma – renunciation and restraint are the watershed, the dividing line between the habituation that he called saṁsāra (‘wandering on’) and nibbāna, the ‘unbinding’ of those very habits. And the deal is that if you want to unbind habits, you bind your mind to a training. So in the graduated path, first of all you centre in the heart through cultivating generosity, and in the respect for others that epitomizes moral integrity. Then you cultivate sense-restraint and renunciation; and then you practise in line with the four noble truths. The opening part of the sequence is not difficult: anyone who can be trained recognizes the value of giving and sharing, along with the need for boundaries around behaviour. In the light of that understanding, it’s easy to acknowledge that sensuality can drive people to murder, steal, lie, and sexually abuse others; or at least to consumer addiction. So one acknowledges that the mind/heart needs restraint. It’s a sobering truth, but without the harnessing, conserving and skilful directing of the mind and its formidable energies, unbinding doesn’t happen. In fact, without restraint effort itself becomes a strain and a chore – because we don’t have the juice and we’re carrying too much weight. The message is: get lean, get fit and you won’t have to labour. But that means restraint.

The need to get a handle on the sense-world is pretty much why I became a monk: to meditate, for sure, but with the recognition that thus mind needs reining in.  And it’s not just sex, drugs and rock and roll that are the issue. Mental proliferation into needless speculation and planning, doubt about oneself, rehashing the past and distraction into anything, are far more common and insidious. Then are the opinions about what is right and fair and the way people should be (I’m still working on these). Out of all that, the mind spins fascinating webs, and makes the weave of saṁsāra more dense and knotted. But however well it is woven, if we examine the fabric of our self-concern, the heart/mind isn’t at peace. As another dialogue between a deva and the Buddha illustrates:

‘Always frightened is this mind,
The mind is always agitated
About unarisen problems
And about arisen ones.
If there exists release from fear,
Being asked please declare it to me.’

Now this may all come across as very monkish, world-denying and inapplicable to lay life.  But I don’t think that’s the case. Firstly neither of the speakers in these specific dialogues is a monk or an ascetic, and secondly the graduated path is the mainline teaching that the Buddha gave to beginners. It’s only when they could handle generosity, morality and renunciation that he felt they were ready for the liberation teachings of the four noble truths. But the path is graduated and it unfolds by steps: restraint allows one to get perspective on the mind, and the effect of that is that one sees what habits are unskilful and go nowhere useful, and also what qualities (such as kindness and sharing) gladden the heart. That process ripens into a more reflective mind-set that withdraws from worldly values and readily enters meditation. Meditation then provides the calm, and inner happiness that allows one to acknowledge the craving at the root of suffering and to let go of its urges. It works: letting go happens, across the world and across cultures. The real-life examples as far as I can see are that committed lay practitioners party less, if at all, abstain from taking life and from harsh speech, and live with sexual restraint or even celibacy. It’s not a matter of culture, belief or indoctrination; you’re a danger to yourself and others if you don’t learn the value of letting go.

In terms of letting go, restraint is only a beginning, and has its limitations. We act and our attention goes out; the mind gets busy; we acquire and engage. But as I notice in myself through years of having my attention engaged in management and organisation, restraint sinks deeper than apparent mental activity. It ripens into relinquishment: when you give up success and failure, you act just because the intention itself is good and clarifying. For example, I have no expectation of getting my recitation complete, let alone flawless, but it doesn’t matter: energy, application and one-pointedness are good for the mind.  And as the mind relinquishes spinning out into the future, results, or self-image, it steps out of its activity. A distinction between the mind as an activity and mind as a still knowing becomes clear. So even when attention has to go out, the heart doesn’t. When you no longer relish the rush and the resonances, the successes and self-imagery, the stickiness fades, and there is an awakening to freedom.  Most webs are really 99% space; as the world deconstructs, the openness remains.