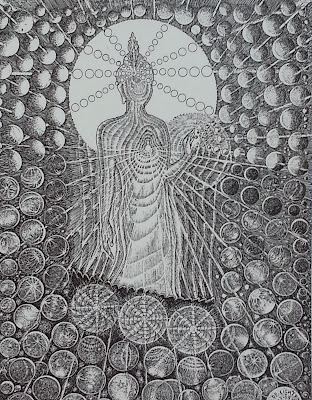 In essence this entails exercising wisdom with regard to the emotions and views that arise from agreeable and disagreeable impressions, most of them mentally based. That is, for example a taste isn’t delicious, my psyche finds it so.  What makes a shape 'beautiful'? On the other hand, blue could well be the ‘wrong’ colour for you to dress in. And: ‘That so-called music of yours is a raucous din!’ And then the big issues: other people.  Our emotions are interpretations, and they press our buttons with ‘like-dislike’; and our interpretations surge up: 'power-mad', 'ineffective', 'untrustworthy'.  In Buddhist parlance this escalating activity is called ‘the arising of the world.’
In Dhamma-practice, the entry point is certainly subjective feeling: ‘All dhammas(= qualia of experience) converge on feeling... are mastered with mindfulness ... supervised with wisdom ...culminate in the Deathless‘ (A.10:58) But note the mastery: that’s the vital hinge whereby the world subsides and the doors of the Deathless swing open. That takes an authentic, fully conscious, and cool activity with regard to the arising and continuation of one’s world.  So maybe, maybe... it may be the case that with a skilled guide, one can steer through the unravelling that psychedelics offer – but even given a disciplined approach, I personally remain sceptical about blending psychedelics with Dhamma practice. For a few reasons.
Firstly psychedelics don’t get the mind to bring forth its strengths, virtues, warmth or discernment to rightly engage with the world. Instead, the mind’s response is rendered passive in the face of transrational energies. As is reasoned analysis – the aspect of Dhamma that serves to question and to integrate what has been revealed into a new way of being. Having understood unsatisfactoriness, and not-self, and having cultivated restraint, goodwill and patience: what is your livelihood, how do you serve? The ‘translation’ of the mystic or insightful experience into the mundane, an integration into the relative world – that’s what the eightfold Path is about. Certainly the Buddha modeled this path as selfless service. And with that the accept Dhamma as an authority and guide, rather than the operate according to personal inclination or view. This authority is a precious pearl that should not, and cannot, be handed over to another person, let alone to a drug that can only absorb you into perceptions and feelings.
This is where another stumbling block occurs with psychedelics: they tend to highlight what the mind ‘sees’, its perceptions and consciousness, rather than what it ‘does’ – its hanging on to and fondling of these aggregates. Buddha-Dhamma is about letting go of these, through realising their constructed, fallible and changeable nature. To this end, it presents a developmental line of ‘disengagement, dispassion, ceasing and relinquishment’ with reference to consciousness and perception (and the rest of the aggregates). Does this seem abstract or nihilistic? Well, you practise it through entering and abiding in your own embodied presence – and within that you find a centred energy that stands back from mental creations, not because it disapproves, but because it already is of another domain. And yet it can sense, receive and moderate the mind and its world by its  steady presence and innate empathy. The results are earthed and affirmative. Hence one gets to realise that there is a ‘place’ of letting go, or of non-belonging to the sense-world.
And this is where another dissonance with psychedelics crops up: the expansion of consciousness expands the world; it magnifies all that consciousness brings with it – which includes perception/impression, feeling and impulse to act. The most striking shift that pyschedelics bring around is in the case of perception (Hence Huxley’s ‘The Doors of Perception’): colours sing and vibrate; sounds issue forth flowing patterns – and all this is emotionally moving. The effect is mostly delightful, although waves of terror or grief are possible. This emotional effect, as in the above case of blue being the ‘wrong’ colour, intensifies the mind’s hold on that perception. Or it equates the perceptual conjuring trick with a revelation of the true nature of reality. But a cooler realization will tell you that perception changes, is subjectively biased, and is emotionally and psychologically captivating. It inspires belief – and is not a true reality. Waves of euphoria on the other hand, and the fixation of attention associated with the psychedelic experience, lean against that very realization. In which case there is no release from the conjuring trick, nor even the understanding that such a release is needed or valid.
‘In this fathom-long body with its perceptions and mind is the world, the origin of the world and the way leading to the ceasing of the world’(S.2:26) is another lead on the rationale of awakening. If what we perceive is an experience that is dependent on our unconscious activities, holding onto it is equivalent to engaging with a multi-dimensional mirage. An engagement that is based on truth has to come from dispassion towards that mirage. But you relinquish the mirage from being coolly right here with it. In this body, where consciousness and perception (and the rest of the aggregates) naturally arise. Here the mind’s innate strengths and virtues lie, along with its shadowy tangles and conjuring tricks. So rather than changing the balls, we learn how to juggle and dissolve them, in the workshop of our birthed form. That’s in it’s own right is quite a trip! Better keep the place clean and clear.
Posted by Ajahn Sucitto at 15:49 2 comments: