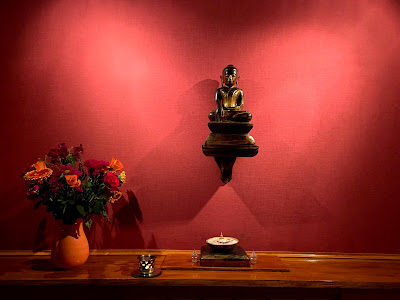 A vase of bright flowers sits on my altar, beneath the Buddha-image. It arrived a few days ago through the mail, with no accompanying letter. The flowers and the gesture are message enough. On the other side of my room is a pile of letters and cards; it's a bit of a mess, and I keep meaning to tidy it up. But every time I look into that stack, I read notes sent from here and there and places I've never heard of, let alone visited ... and they offer me a glimpse into other people's lives. They speak of gratitude, of confusion and pain dispelled, or of clarity and inspiration gained as a result of listening to my elaborations on the Buddha's Dhamma, but above all, they share, they impart presence. So it's not easy to dump that in a bin. Today a pair of woollen socks arrived, on another day it was a parcel of tea (and so on): the same response for the same reason. What goes to the heart, brings forth the heart; it's simple and beautiful.

My response has to be to chant blessings, mantras and protective invocations (parittā). Sometimes there's a name or a face or a collage of impressions that I bear in mind as I chant; a way of inclining that blessing to particular people or events. But even when a thank-you is signed, it serves as a handle to something larger: 'Lee' or 'Suki' are localised living entrances to the great heart. Made poignant by the world-tossed nature of the person through which that heart finds voice, its ability to manifest is timeless and indomitable. And its language is universal. So I chant the blessing in like manner - wherever, to whoever, alive, dead or yet to be born. And I use the ancient tones and phonemes of Pali, a language made sacred by being constructed to carry the Buddha’s teachings - a language that is not mine, and that has poured through the throats and lips of multitudes with the aim to expound the Way of Truth.

With such utterance, meaning isn’t deduced, it enters; chanting is a whole body experience – you feel it. First comes the gathering in the belly, and the swell of the chest and the awakening of the throat; then the soft cavity of the mouth shapes and sends the sound forth as the bones of the head resonate and the pulses in the skin tingle. This is embodied devotion. The listening deepens, comes alive. Sounds, tones and mind spread out within the heart-field of benevolent causes and effects, the 'sacred Cosmos'. Yes, there’s a domain we can evoke and enter –  no visa required, no security checks – and as it supports us, we support it. From its innumerable and mysterious causes and conditions, benevolent influences have come into my life just as they have guided the lives of others; and so awareness must be extended beyond me and time and incident into the domain of love and integrity and self-surrender that is the source of our lived-in truth. We are fragile, we are resilient; we are separated, we're connected. In the language of the heart these are not contradictions. The sense is of embracing the entirety of our humanity.

To touch into that heart-quality and strengthen it, as crisis after crisis floods our world is at least as necessary as connecting via the phone, walking in green places or doing pilates. Because even giving cursory attention to the current scenario of the violent fragmentation of societies, the desecration of nature and the strangulation of truth gives rise to a kind of vertigo. And as what seemed to be our shared ground shakes, it’s easy to slip into a bleakness where resonance and meaning fall away. But don’t be deceived by circumstance – this has always been possible. We’re on a pilgrimage wherein the gates to that abyss are always open, just as the assault on virtue and value has always been there. In the pre-rational age, its forces were configured as ghouls and demons and yakkhas not as dark networks, corrupt leaders and their slogan-slinging agents. Nowadays political slogans – 'Stop the Steal', 'Take Back Control' - become mantras that repeated time and time again evoke paranoia, division and violence. Thus the dark Cosmos arises. But at any time in measurable history, if you soften the focus on the statistics and the personalities, you become aware of that same field of defilement, evil, and confused and sick hearts – and understand from where and how that dark Cosmos unfolds. It is these roots that we have to suffuse and clean with goodwill, truthfulness, sharing, and selflessness. Whereas minds can state, argue and condemn – and be met by counteractions, legalities and politics – it is only the heart that can suffuse. And there's no counter to that.

The forest ajahns made no mistake in this respect. When out in the wilderness, they would take refuge and chant parittā on a daily basis in order to generate a field of blessed energy within which to dwell. Then conduct themselves in accordance with the rules of that field of virtue and value (aka puñña) through observance of morality, respect of other natural and supernatural creatures, and a turning away from worldly ways. This field of heart energy is a normal, though ignored, aspect of how consciousness works; it is detectable by devices, by people (who may detect the particularly powerful field of a holy person as an aura) and by animals. (See Anna Breytenbach’s work on animal communication .) It may be an aspect of the morphic field that biologist Rupert Sheldrake proposes as holding the intelligence of living creatures. But to get to the point, this offers solid ground.

Tuning into the intelligence of the heart is necessary to make a way through dense forests inhabited by wild animals, spirits and outlaws, without a map: just chant the Metta Sutta, settle in, resolve and follow the attentive heart. On setting up a temporary residence in a cave that could be visited by a bear, cobra or restless spirit, you’d better open to the place, ask permission of any spirit or creature who might frequent it, share merit and establish truthful alignment to the Triple Gem. On meeting outlaws, keep your heart cool and present your virtue.   Above all,  you should know for sure: the Cosmos is multi-faceted with many locales. And only a superficial review would say that dangerous places no longer exist; nowadays they're located on the internet, next to your online shopping page; or in those halls and corridors where power corrupts and eventually buries the heart. To ward off the slide into the defeat that renders aspiration impotent, the advice has to be the same.

This is how you survive. A fellow-bhikkhu was hospitalised for an extensive period with impaired brain capacity due to blood clots. Memory – the presenter of name, place, and identity – was fragmentary, and would disappear for periods of time. At one time, in one of those ‘out of any world’ episodes, he could feel the confused and dark forces of all the troubled beings who’d sickened in that hospital, or of whatever is attracted to those at death’s door. They were gathered around and pressing in. Fortunately, although he couldn’t remember who or what he was, he did have the parittā established and managed to silently intone them.  As in one of those medieval accounts – maybe they were right?- a bright tone arose and steadily spread through his being until the darkness cleared.  After surviving in heart, his physical condition steadily improved; now he’s back in community.

So I’m increasing my level of daily recitation – in private. (In the monastery, chanting in public has been whittled down to a breathy murmur as a a Covid precaution). The tip to do so came in the form of a māla, a string of 'prayer beads’, that arrived as a gift from a friend in Wales I’d seen on only a few occasions in the last three decades. An accompanying note recollected a mantra that I’d given her at Amaravati in the 1980s when life was very busy, uncertain and intense. Since that time, she’d suffered from a nerve malfunction that switched off synapses in her limbs for periods of time - virtual paralysis accompanied by intense pain. She and her husband moved to Wales seeking seclusion in order to place their lives more single-mindedly in the Triple Gem. Arthritis set in - her hands were like knotted bamboo. At times she took medication, but to avoid side-effects, that couldn’t be a continual strategy. The core advice from the physician was to never give up. She persevered, struggled, exercised, shared Dhamma with friends, meditated, and chanted. Over the years I visited a few times, eventually noticing to my delight that her hands had slowly regained flexibility, and she could now play the piano, paint, and draw. And some time around the last winter solstice, when darkness is the norm, she made me a māla, carefully threaded the skein of beads - and sent it as a gift. How could I not keep chanting, opening to whatever arises, when this is the field that it connects to?