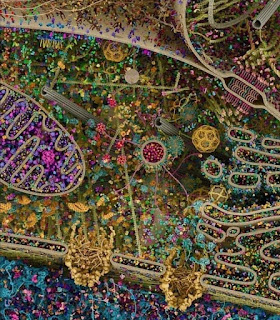 This is  not a painting. It is the most detailed image of a human cell to date, obtained by radiography, nuclear magnetic resonance and cryoelectron microscopy. What it shows it that at the most fundamental organic sense, we are a community of oddballs.

[Thanks to Evan Ingersoll and Gael McGill, Harvard Medical School]
****

Like many of you I expect, gazing at screens has become part of my daily life.  And for this past year, talking and listening to them (or more accurately to the images that appear on them) has also become an occupation. A button is pushed, a line or cluster of thumbnail faces appear, clicks occur – and away we go. But where? In the internet age, one must always regard the attractive website, the pleasant face and smooth words with circumspection. However, public presentations have always merited caution: deluded mystics and frauds write spiritual literature, demagogues and moneyed interests take over the media. We’re easily taken in by superficial appearance.

You could say that superficiality is unavoidable: if, that is, mind-consciousness is something like a screen and faces of people you have connections with just pop up on it. You look at them, they look at you and at some time switch off, or zone out. Sharing absence. It’s a bleak scenario, one that doesn’t acknowledge the fullness of being embodied: that bodies have intelligence and store past kamma in their nervous systems; and that sharing presence is a powerful act that doesn’t cease when the face disappears. Presence is our natural foundation, and when it’s shared, it's like entering another room in your house. And a sense of that room remains.  If you enter it, that is - through deep attention.

Collective intelligence sometimes is and sometimes isn't that wise or deep. Compare the intelligence of mothering, the collective spirit of a sports team, the synchronicity of a band, the creative power of group thinking, the strength of a public demonstration, or the intensity of a riot. Potentially, the most stable shared presence comes through spiritual attunement: the power of a collective presence that is collected, but is not about doing things. Such presence, even with no physical contact and in silence, is different from being on your own.  It can anchor you, and also take you into deep inner territory.

In the pre-Covid era, a year or so ago, a friend in South Africa described the effect that even a few seconds with the Dalai Lama had on a group of young men. They weren’t into Buddhism or spirituality, but as he was visiting an educational establishment where they had received awards, they were invited to file past him briefly, meet for the length of time of a handshake and move on. She said there was not one of the young men who weren’t brushing away tears as they left his presence. Imagine then what it must have been like to be in the presence of the Buddha! And how every word he said would have etched itself into your heart and mind. Conveying information has only ever been one aspect of teaching the Dhamma; furthermore, it was always a spoken transmission, uttered in shared presence where the timing, the tones, and the embodied energies could all play their part. Being in the presence of another and having the defensive shields and the personal presentations fall away; just experiencing self-acceptance and the truthfulness of meeting straight from the heart – that’s a spiritual transmission in its own right.

So I must admit that teaching online presents certain difficulties. If I have a teaching style or method, it's one that entails establishing a firm grounded presence with where I’m sitting. This is more tricky when I’m sitting on a stool in order to face the screen and my body isn’t held in the same stability that occurs with the lotus positions. The connection to what's beneath and around me isn’t entirely absent, but it is reduced. I find myself less in flow, and having to think while I’m teaching. A more apparent snag is the reduction in shared presence with the people I’m teaching (or better, guiding); a presence that enriches the sense of rapport and also moderates what and how much I say. There is a fine weave of somatic energies that develop in a group gathering; when people are meditating together, this helps to draw teachings out of me. It also gives me the sense that what I’m transmitting is being received. So I get a feel for where to go in a talk, and what is enough. However in a gathering of over 200 people online, there is little of that. There are also less opportunities for dialogue. So with such minimal ‘real presence’ I find that my awareness is leaning into the screen to reach people, and I’m perhaps talking too much. I can feel that I’m speaking to others, but I don’t get a sense of being heard. It’s odd; like wearing a blindfold.

There are of course the bonuses of online teaching: no travelling, no visas, no airports, border interrogations, carbon guilt and jet lag. And there’s the positive aspect: a glance at the labels underneath the thumbnails presents an occasion wherein people as far apart as Mexico, Oregon, Germany, Singapore, South Africa and Taiwan are linking up. There’s awe at witnessing a teaching trickling into diverse contexts. And for those who participate – how wonderful to be part of a global presence that’s divided by the mere frame of an image; to get a sense of connection to other ordinary people in their living spaces and basements – with the occasional dog or cat wandering through. It is an echo of something we used to take for granted, while making efforts to disguise it with business or some other purpose; the sense of mingling. However, give deep attention to what makes mingling comfortable, when it doesn't, and what it highlights. The sense of safety is crucial. Inattentive mingling is liable to be insensitive to deep issues in the heart.

It’s said that babies and infants need to be physically held in order to develop as proper relational human beings. Failing this, autism or even death may occur. So at what age does that need pass away? Five? Ten? We might assume that as the years trickle by, the need for embodied contact gets replaced by our being wrapped in conversations, or by living with others and exchanging words now and then; or by getting wrapped up in a book or glued to a screen. I think not. Although the distracted life of screens and timetables may take up so much of a person's attention that it does hold them, it's a fragile kind of wrapping – not the deep immersion of somatic presence. Switch off the input for ten minutes and what happens? Chaos or in-depth settling? You can't substitute presence for absence.  Humans need immersion in somatic presence. That lingers; that's what Buddhist meditation is (supposed to be) about.

In solitude, there is a need for embodied presence – 'mindfulness immersed in the body' in the Buddha’s language; it takes awareness out of the conceptual and abstract and places it in something that's vitally sentient. The Buddha likened such immersion within (not of) the body to a stake to which one could tether the visual auditory, olfactory, gustatory, tactile and conceptual senses so that they no longer pulled awareness/citta hither and thither. It has a non-conceptual intelligence that stands apart from the buzz and waffle of the thinking mind and the upheavals of the heart, and it’s not personally driven or engineered. It’s the sense of the whole body, settled in its space. Whereas the personal and the emotional and the conceptual can get taken over by embedded anxiety or trauma, the whole body in its space accesses safety, a sense of belonging and non-compulsiveness. This is an essential foundation within which to dwell in and work; so much so that Buddhist training recommends dwelling in the company of a teacher or in a group that's formed around presence.  When you're not settled in your own presence, then that of a trustworthy other is a spiritual requisite.

Sharing presence. Despite the oft-repeated exhortations – and the personal inclinations – to seek solitude, in training monasteries the relational sense has be active to operate within the etiquette that moderate group dynamics, seniority and authority. And although the waking day is apparently divided between duties on one hand and meditation on the other, the silent communal meal, and the communal work – stacking firewood, sweeping the monastery – have more than an external, functional purpose. Even in this diluted, everyday, form a shared embodied foundation keeps things sane and related, even when there’s not a lot of personal contact.

A grounding in trans-personal presence helps supports security in relationship. Topics and circumstance then rest on the non-doing of presence rather than override it. Matters can be handled from a grounded perspective. Of course, this deep attention is challenged by and goes against the tendency that people get conditioned into: one of immediately launching into business (to be efficient and not ‘waste time’) or personal topics (whether a way to handle these has been established or not). This can be disastrous. So mindful mingling is quite a skill; it has to be learnt. In British monasteries, the opportunities come with quiet tea breaks, or as tidying up after the meal comes to an end – or sometimes while the tidying up is supposed to be going on.  In Thailand, the mingling instinct comes out in more direct ways: monks just turn up from near or far to meet. As the abbot of Wat Pah Pong commented at one of the annual mass sangha gatherings – ‘we meet just to meet’. Unlike business meetings, there’s no agenda. Bowing on entering a room, or when meeting a teacher helps to put a check on compulsiveness. If a senior teacher is involved, some Dhamma may be expressed. A foot massage may be offered. Otherwise it’s just letting things flow from presence. This can be criticized as time-wasting and idle chit-chat, but something more fundamental is occurring. There's a sense of somatic or psychological co-forming, an energising of relational energies, an affirmation of belonging. Mutually massaging with presence. This supports community harmony, helps awareness to be held less tightly inwards, and allows fixed or afflictive perceptions around self and other to be eased, often more or less wordlessly. Some business then ceases altogether, or doesn’t need much discussion.

Shared presence can be deepened simply by tuning in to one's own somatic presence, getting grounded – and then gently opening to the felt fact of another person. Remember: stay on your own somatic ground, and open your attention from there. Acknowledge, but don't go into visually-based perceptions, but do attend to the voice. This may take a few minutes, but it saves hours of superficial mis-contact, and mistakes. In its own deep truthfulness, the presence of others adds to one's own. And it doesn't entirely pass away with separation. In cases when one has shared presence with others in a fully conscious way, the sense of meeting is like returning home – to that larger house.

Deep attention to one's somatic presence also indicates what to be on guard against. If the other can’t bear silence and negotiation of contact, they’re not coming from an authentic place. And if you can't maintain a disengaged but embodied presence, you'd better get grounded – soon. That's where you're welcome and safe; that's the place to receive teachings. So even with online occasions, it’s good to have pausing and acknowledgement; to enter one’s own presence and see, listen and speak from there. Be aware of the embodied tones and breath-rates. Books, for all their usefulness and portability, can't bring you there. Then again, neither can blogs.